So Drop Out Luke recently went out to Europe to play at Dorstival in Dorsten, Germany.

So the weekend started at 5:30 on the Wednesday when Chris showed up early at my house ready to take me. The cheeky lad interrupted me halfway through episode 10 of Dexter, Series one which completely threw me off when I came back to rejoin the show.

Needless to say, I was in a pretty excited mood. We picked up Finch and Shannon (Finch’s lady friend) and headed to Wine Express. This was a shifty looking offy down the road from Finch and I decided it was a good idea to pay by card. I’m still fine so far.

Booze became a major contributor to my night, but so did television programmes on snake bites and other such vicious creatures inflicting harm and permanent damage upon man. This was tactfully followed by Rosie’s (Chris’ Fiancee) bringing down her rats and then her lizard…Thanx, I’m only terrified of Snakes and that lizard looked a damn lot like one!

I was forced to go to bed at about 1am and fell asleep about 2am to a beautifully pleasant and fairly in time panting and groaning symphony from the floor to my side.

Next morning, up at about 3, left at 4. But not until Chris had another beer to get ready to drive! What a tit….it’s fine, I think I drank most of it.

Driving to Dover was a blast! I spent my last few hours on Facebook (praise the lord for creating iPhones) and playing Solitaire. The ferry was dull, apart from the moment I awoke from a 20 minute power nap to a load of people hurrying me off the ship.

Drive was dull, I slept, I ate, then we got pulled over by the Belgian police in Germany…not sure how that works but whatever.

Cut a long journey short, when we got to the hostel, it was in the middle of bloody nowhere. The lady (Helga) was terrfying and spoke even less English than Finch did German. It got solved eventually after hours of stress and desperation for beer and a warm meal. The place actually felt like something off a horror movie.

That afternoon, we were bombarded by about 40 kids who’d never heard our music but were desperate for our autographs and photos…they then wanted us to play a set.

Meanwhile Press to Meco (the other band from the UK) were settling in and pissing about. They also signed a tonne of autographs and had photos and played a set… their set was far better than ours. Lame.

We all went out finally to find….McDonalds. German McDonalds sucks royal shit.

Press to Meco showed us that they can party pretty good as well as play a few good tunes.

We got boozy and naked that evening.

Day 2 involved waking up to what can only be described as the kids from Madeline speaking German whilst Lord Cuckooface was showing English bands around the hostel.

We bummed about and had some beer, then had some lunch at a restaurant in the town. This place made some pretty good pizza and the man gave us a shot of what can only be described as ouzo, meets gin with a slightly stronger taste. It was free so who cares. We got over ourselves and went off to see Press to Meco at Dorstival. The weather was proper crappy so Paul and I bought lame Ponchos that Chris called Panchos. They had a skull and crossbones on the back. I felt tough. Real tough. Press to Meco kicked ass, despite the lack of crowd and the rubbish weather. We all went out to eat something that evening. I can’t remember what…maybe we didn’t.

We found these, they amused us for a minute.

We bought some pretty awesome beer that morning and it certainly harms your memory, decreases clothes and increases noise. No hangovers though. In the process of finding the perfect beer we came across the wonder that is…

We got boozy and naked that evening.

We didn’t eat much breakfast this morning. We went to town for a late breakfast and decided to hold off and get pizza at our new favourite restaurant.

Then we walked around town and realised it was dull. We then chilled out by a bit of water and I tried to sleep bolt upright on a chair outside a cafe.

We were then asked to have our photos taken by a German/Scottish lady with brightly colour Kazoo’s. Needless to say we all jumped at the opportunity and got down to business. Then a guy with typically scene hair asked if he could also have our photo. Then some kids also did.

We went to the festival, loaded our gear into the holding area and went to watch the bands. I tried Rockstar Apple Energy drink and decided I still don’t care too much for energy drinks. We were pretty dissapointed by the crowd. Time to get all the gear ready came along and so we did. At this point it is definitely time for some beer. So I had a couple. Continental head in a too small cup serves for very rapidly decreasing amounts of beer in my possession. This greatly disappointed me. Easily rectified when the beer is free though. We played. The Crowd grew. Packed away. Went out front. Got bombarded. Rad. We met so many really awesome people and had the best time of our lives on stage. The crowd were really really receptive and seemed in general to have a good time.

So the free booze came in really handy now we’d played. Rounds were acquired, sunk rapidly and the process was repeated. Needless to say we got pretty messy. Cut a long boozing story short. It came time to go back to get some food and go back to the hostel for more beer.

We were gonna go to a restaurant called Mongolia. These two girls decided they wanted to come with us. NICE!!! Haha! So pretty much we ended up borrowing them for a while. They got in the van with us and we went to the car park. All was well apart from a few things that needn’t be mentioned. Then certain words were shouted towards the girls that may or may not have seemed offensive / cheeky / ruude 😛

I’m pretty sure this triggered a switch in their heads that caused instant panic and they asked to get taken back to the festival. Myself and Chris being the lovely fellas that we are went back with them and tried to reassure them we’re not actually crazy!

…after solving all the earlier issues we went back to the truck and went to Burger King…Yep, we eat in style. If there’s a crown or a red wig / clown suit in sight, be sure, we’re eating there.

Press to Meco were there. They we originally going to go to the restaurant with us, but it was closed. Guess we made the right decision not bothering.

We got back and drank more, so good. Luke from Press to Meco and myself decided it would be interesting to try and play New Noise by Refused in sync on our iPhones. It didn’t work. So I continued to try and sync them using distance as a time delay. It kinda worked!!!

Wake up time. We lost our video camera. All our footage of boozy evenings and travelling up and our set was on that camera. Pretty shitty.
Tiny brekkie. Coupla coffees. Time to go home. Journey was super long and we got lost for about 3 hours in the same place. I blame Thomas Thompson.

No police. No sleep (for me). No internet. No booze. No fun… I want to go back. Take me back to Germany. Dorstival is rad. We met so many awesome people and had so many great times. Press to Meco are an awesome band and really awesome people. I kinda miss them a little bit too…only a little bit mind, but still.
Until next time Germany, 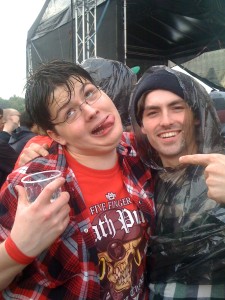 This is totally rad!